Home > A History of the Philly Cheesesteak

The most famous question in Philadelphia, “Pat’s or Geno’s?” refers to which rival Philly Cheesesteak is better. Both cheesesteak shops face each other, taunting each other, as customers stand in line for their favorite steak. It’s an age-old rivalry on 9th and Passyunk Avenue, creating a popular tourist destination and a Philadelphian’s favorite late night snack. 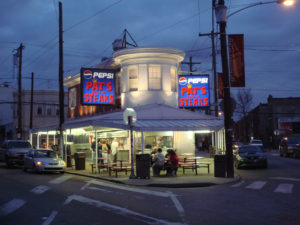 Who Invented the Cheesesteak?

Pat Olivieri (creator of Pat’s King of Steaks) invented the Philly Cheesesteak in the 1930’s. Story has it, that Olivieri was a hotdog vendor and decided to put grilled beef on an Italian roll. A taxi driver smelled the sandwich through his window and fell in love with it. Other taxi drivers heard of the steak sandwich and came from all over the city to try one of Olivieri’s sandwiches.

It wasn’t until the 1940’s that melted cheese was added to the steak sandwich by a drunk manager, Joe Lorenzo at one of Pat’s locations on Ridge Avenue, according to Philadelphia Magazine. It first started with provolone, then Whiz came along and stole the spotlight.

The competition began in 1966 when Joey Vento opened Geno’s directly across from Pat’s King of Steaks. With bright neon lights that can be seen from blocks away, it easily grabs the attention of customers, but that doesn’t mean they serve better cheesesteaks than Pat’s.

What is a Cheesesteak?

A Philadelphia Cheesesteak is grilled thinly sliced beefsteak with melted cheese on a long Italian roll. Toppings can include, fried onions, sweet or hot peppers, sautéed mushrooms, and ketchup.

Geno’s is known for their face-reddening hot sauce, giving their Philly Cheesesteak a little kick. While Geno’s has hot sauce, Pat’s offers large hot peppers ready for the taking in a large jar next to the ketchup and napkins.

With lines that can sometimes grow to be a block long, the employees don’t have time to wait for customers to look at the menu and think about what to order. With just two simple words, you can order your classic cheesesteak: “Whiz, wit.” This specifies what kind of cheese you would like, in this case it would be Whiz cheese. The second word specifies whether you would like fried onions or not. (In a Philadelphia accent, “with” or “without” turns to “wit” and “wit-out.”)

Both Pat’s and Geno’s are cash only so keep those credit cards tucked away. Come up empty handed? No worries, there are plenty of ATM’s within a block’s radius! Just make sure you practice your order while standing in line, because if you take too long, they won’t hesitate sending you to the back. 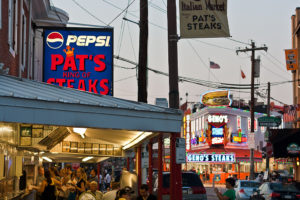 For years Philadelphians and tourists believed there was an intense rivalry between Pat’s and Geno’s, but instead of being pitted against each other, they came together to prosper in Philadelphia and become known as the “Royal Family.”

It isn’t rare to find the most prominent cheesesteak heirs gathered at Rim Café enjoying espresso and cannoli. Sharing the same distributor, love for cheesesteak, and friendship, the Royal Family has it pretty good in Philadelphia.

Want to Live Closer to the Cheesesteaks?

Do you love Philly Cheesesteaks so much that you wish you were within walking distance or do you just want to be in Philly in general? Contact the Agent Lady today to schedule a free home buyer consultation.

"Cherise was extremely hardworking and got us the answers to our many questions promptly."
- Condo Buyer in Rittenhouse Square
View All